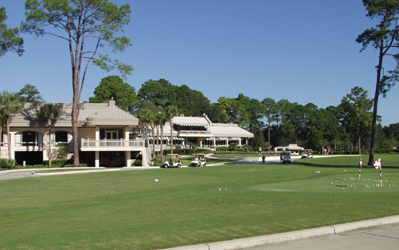 Golf balls have come long way since someone first knocked a rock around a field with a bent stick. The game of golf as we know it today was first played with a leather-covered ball stuffed with feathers, but in between that first rock and the “Featherie”, the game was played with wooden balls.


Now let’s take a look at Golf Ball History and follow the timeline that has taken us from “the rock” to the modern dimpled ball in play today.

The crude use of the rock in golf ball history gave way to a wooden ball, and then in 1618 the game of Golf was introduced to the first “Featherie” Golf Ball - a leather-covered ball made of horse or cow hide and stuffed with goose or chicken feathers. The leather pieces were stitched tightly together, leaving just a small opening, and then the casing was turned inside out. The boiled and softened feathers were stuffed into the opening that was left behind and then final stitches were added to close the ball completely. It’s said that the amount of feathers stuffed into each ball was about the amount it would take to fill a “gentleman’s top hat”. As the ball cooled, the feathers would expand and the hide would shrink, making a compact and hardened ball. Any remaining openings in the cowhide were stitched to close them up and the surprisingly hard balls were then hammered into roundness and finally coated with several layers of paint.

Two major drawbacks to the Featherie’s design were that it was near impossible to make a perfectly spherical ball and they often flew with great irregularity, and in wet weather conditions, the stitches would rot and the ball could come apart.

Despite those obvious shortcomings, the Featherie had great flight characteristics (for the time period) and remained the standard for more than two centuries, even though the production process was difficult and time consuming. An experienced ball maker could only make a few balls in one day, so they were expensive – about the equivalent to at least ten American dollars per ball in today’s economy.golf ball history

The Gutta Percha Ball came on the scene after its introduction in 1848 by the Rev. Dr. Robert Adams Paterson of St. Andrews. He discovered its possibilities from noticing the versatile use of gutta-percha packing material. Gutta-percha is the evaporated milky juice or latex produced from the sap of the Malaysian Sapodilla Tree. It is hard but not brittle and becomes soft and malleable at the temperature of boiling water. These balls were handmade by rolling the softened material on a board, and the new durability of the Gutta Ball, together with its much lower production cost, resistance to water, and improved run, provided rejuvenation and a needed boost to the game of golf. Although there was obviously some resistance from the game’s traditionalists, the Gutta Ball gradually replaced the Featherie, and together with the spread of the railways, contributed greatly to the expansion of the game and golf’s popularity.

Originally produced with a smooth surface, it was discovered that defects in the sphere from the gauges and scrapes of normal use provided the ball with a truer flight than the often sought after perfect sphere. After that “accidental” discovery in 1880, ball-makers began creating intentional defects in the surface by hammering the ball to give it an evenly dimpled shape that gave the sphere a more consistent ball flight.

The most notable manufacturer of the Gutta Percha Golf Balls of this period was Allan Robertson.

That “accidental” discovery gave birth to the Hand-Hammered Gutta Ball. After about 1880, the “gutties” were produced with patterns on their surface in an attempt to reproduce the distance characteristics of a scored or “defective” ball. Industrialization and mechanization from the Victorians soon followed, and by 1890 Gutties were being made in moulds which further increased their affordability, consistency and overall quality. The most notable pattern of the period was the “Bramble” which had raised spherical bumps across the surface of the ball. Rubber companies like Dunlop began mass-producing golf balls which soon killed off the handcrafted ball business, and gave rise to the variety of surface patterns we now see covering the balls of the modern golf game.

The surface textures and patterns impressed into the gutta-percha balls evolved from early imitations of “defects” into the highly detailed and symmetrical designs that greatly improved the ball’s flight. The “Bramble” pattern ball with its raised spherical bumps (with a surface similar to a berry) became the preferred design of the era and was even used on some of the early rubber balls. The best known balls of this period were the hand-marked private brands of the Scottish club makers, such as Morris, Robertson, Gourlay, and the Auchterlonies.

The Rubber Ball – Also known as the Haskell Ball

The biggest improvement in golf ball design technology came in 1898 from a Cleveland, Ohio golfer named Coburn Haskell. As the story goes, Haskell had travelled to nearby Akron for a friendly game of golf with his friend Bertram Work who was the Superintendent of B.F. Goodrich at the time. While waiting for Work at the plant, Haskell spent his time winding a long rubber band into a ball. When done he found that the “bounced” ball nearly hit the ceiling. His friend Work then suggested that Haskell put a cover on the ball and thus gave birth to the modern 20th century golf ball.

Wound balls were especially valued for their soft feel, and continued to be popular until the early years of the 21st century. In fact, they were universally adopted by 1901 after their use proved so effective in the British and U.S. Opens. These balls looked just like Gutties but gave the average golfer an extra 20 yards from the tee. They were originally constructed from a solid rubber core wrapped in rubber thread and encased in a Gutta Percha sphere. W. Millison then developed a thread winding machine and the Haskell Balls were mass-produced and obviously became more affordable for the masses.

These new design introductions allowed manufacturers to fine-tune the length, spin and "feel" characteristics of balls and the early gutta-percha covers gave way to the Balata cover that was developed in the early 1900s. The popular bramble, mesh, reverse mesh, and other cover design patterns also gave way to the aerodynamically superior dimple pattern first used in 1908. Because of the lack of standardization, there were many deviations in ball size and weight and the period saw a lot of experimentation with different patterns on various ball designs. Then a man named William Taylor first applied the dimple pattern to a Haskell ball in 1905 and golf balls took on their modern form. The modern dimple pattern maximizes lift while it also minimizes drag and gives the ball a straighter and longer flight than it had before.

The modern standardization of the golf ball as we know it today came to be on January 1, 1932 when the USGA (United States Golf Association) set the standard weight and size for a golf ball. The USGA was following the standard set in 1930 by the British Golf Association but for a slightly smaller ball. The USGA Standard was set at a maximum weight of 1.620 oz. and a diameter not to be less than 1.680 inches. Once Equipment to measure velocity was developed, the maximum velocity of a golf ball was set at 250 feet per second, and was added by the USGA to the acceptable set of standards for a golf ball.

Today, modern manufacturers compete for a share of the golf ball market through their Research and Development Departments use of technological advancements in materials and testing. The durability and precision of today’s golf balls are due in large part to the development of space age plastics, silicone, and improved rubber. The use of materials like surlyn and urethane blends provide for the development of balls to suit every playing level and style. They come in classification like two-piece balls, three-piece balls, four-piece balls, and even now five-piece balls with the introduction of the Taylormade Penta Ball. They are often classified also by their price range and/or by the playing level they are designed to compliment. Today there is a rich variety of golf balls to suit the individual game with different balls for control and distance while others are suitable for practice only.

Got any old Featherie or Gutta Percha balls laying around? Hold onto ‘em if you do come across any!! These “antiques” are avidly collected and becoming increasingly valuable. A dimple patterned Guttie in good condition could be worth about $500 US Dollars.


Options for Booking Your Next Tee Time

Return to The Top of This Golf Ball History Page