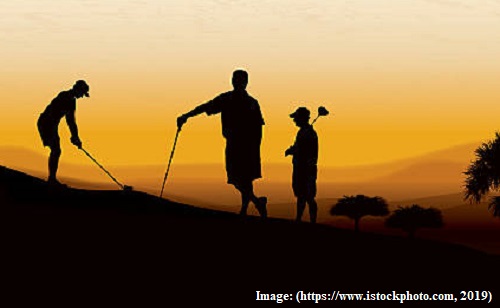 Welcome to Golf Games for Threesomes

This Golf Games for Threesomes Page has suggestions on games to play on those days when your fourth bails on you. Points are accumulated by individuals in much the same way as you'll see in the Golf Games for Individuals Page.

81 is similar to the Six Point Game (above), except that each hole is worth nine “points” instead of six. This game produces higher scores and therefore higher payouts, so think of it as Sixes for high rollers.

* Note - The name comes from the number 666 as the bets are divided into three 6-hole matches.

This game is actually a variation on the more typical Nassau where instead of playing a bet for the front and back nines and an optional third bet for the over-all 18, three 6-hole matches are played under match play rules with each hole being worth 1 win (or 1 point).

Can also be played by groups of different sizes and also by teams of players as well.

To win the Rabbit, one player must win the lowest score on four holes (rabbit legs) before any other player beats him on any hole. Holes do not need to be won consecutively, but four holes must be won by a single player before he loses a hole.

Holes not won outright are carried forward, or for the less aggressive “gamblers” those holes can just die and only points for holes won outright can be accumulated.

~ The Goose & The Gander

Played for one bet per each nine holes – It’s called The Goose on the Front 9 and The Gander for the Back 9.

Played for six “points” per hole.

The winner of the hole gets 4 “points”, second place gets 2 “points” and the loser gets zero.


Got a favorite game you don't see on our pages and want to share it with the world?

Go to Golf Games for Individuals

Go to Golf Games for Foursomes