Lee Trevino Quotes recognizes the sense of humor of "The Merry Mex" who may be best remembered for pulling a three-foot rubber snake from his bag on the first playoff hole of the 1971 U.S. Open.

Another PGA Tour Champion who rose from overwhelming poverty to command a following as much for his quit wit and self-deprecating humor as for his talent with a ball and a club. lee trevino quotes

Lee Trevino was never short with an entertaining quip or a clever quote for the press or massive galleries that loved to follow the PGA Tour's favorite comedian.

Late in his career, Lee Trevino remarked, "I played the tour in 1967 and told jokes and nobody laughed. Then I won the Open the next year, told the same jokes, and everybody laughed like hell."

A rough should have high grass. When you go bowling they don't give you anything for landing in the gutter, do they? lee trevino quotes

Arnie has more people watching him park the car than we do out on the course.

Columbus went around the world in 1492. That is not a lot of strokes when you consider the course. lee trevino quotes

Golf isn't just my business, it's my hobby.

His nerve, his memory, and I can't remember the third thing. Lee Trevino on the three things an aging golfer loses.

I adore the game of golf. I won't ever retire.

I love Merion and I don’t even know her last name. Lee Trevino referring to Merion Golf Club - the host of more National USGA Championships than any other club.

I never played much golf as a kid. I caddied quite a bit but never got serious into golf until about age 15.

I’m not saying my golf game went bad, but if I grew tomatoes, they’d come up sliced.

If my IQ had been two lower I'd have been a plant somewhere.

If you are caught on a golf course during a storm and are afraid of lightning, hold up a 1-iron. Not even God can hit a 1-iron.

I'm a golfaholic, no question about that. Counseling wouldn't help me. They'd have to put me in prison, and then I'd talk the warden into building a hole or two and teach him how to play.

I'm actually a very quiet person off the golf course. I talk 150 miles per hour when I'm at the course, but when in private I very seldom ever open my mouth.

I'm going to win so much money this year, my caddie will make the top twenty money-winners list.

I'm hitting the driver so good I gotta dial the operator for long distance after I hit it.

I'm in the woods so much I can tell you which plants are edible.

It's the most fun I've had with my clothes on.

My swing is so bad I look like a caveman killing his lunch.

No one who ever had lessons would have a swing like mine.

Putts get real difficult the day they hand out the money.

Show me a golfer who doesn't have a mean streak, and I'll show you a weak competitor.

The older I get the better I used to be!

There are two things you can do with your head down – play golf and pray.

There is no such thing as natural touch. Touch is something you create by hitting millions of golf balls.

Two things that are not long for this world: dogs that chase cars and professional golfers who putt for pars.

We all choke, and the man who says he doesn't choke is lying like hell. We all leak oil.

Who can say I have a bad swing? The only thing that matters in golf is the score you put on the board. You don‘t have to look pretty out there, you have to win. Look at my record and tell me who has a better swing than mine.

You can make a lot of money in this game. Just ask my ex-wives. Both of them are so rich that neither of their husbands work.

You can make a lot of money in this game. Just ask my ex-wives. Both of them are so rich that neither of their husbands work.

You can talk to a fade but a hook won't listen.

You don't know what pressure is until you've played for five dollars a hole with only two in your pocket.

Thanks for visiting this page of Lee Trevino Quotes 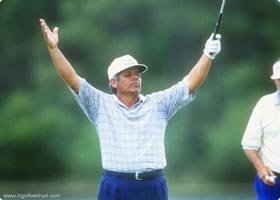 Return to The Top of Lee Trevino Quotes