Sam Snead Quotes recognizes the man who heads the list in career victories with 82, including 7 majors, and was admired by his peers and amateur golfers alike for his "perfect swing".

Sam Snead, Ben Hogan, and Byron Nelson were all born within 6 months of one another, and all three are considered three of the greatest golfers of all time.

Here are 29 quotes from this Hall-of-Famer and Champion of the Game.

But you don't have to go up in the stands and play your foul balls. I do. ~ Sam Snead, to Ted Williams.

First and fore-most, you must have confidence. Your second mental problem is concentration. Think the shot through in advance before you address the ball. Draw a mental image of where you want it to go and then eliminate everything else from your mind, except how you are going to get the ball into that preferred spot. sam snead quotes

Golf got complicated when I had to wear shoes and begin thinking about what I was doing.

Golf tip: Lay off for three weeks and then quit for good.

I shot an elephant in Africa thirty yards from me, and it didn’t hit the ground until it was right at my feet. I wasn’t a bit scared, but a four foot putt scares me to death.

If a lot of people gripped a knife and fork the way they do a golf club, they would starve to death.

If I had cleared the trees and drove the green, it would've been a great shot.

If some players took a fork to their mouths the way they take the club back, they’d starve to death.

Just have a Coke or something and watch the boys go past. Sam Snead's advice to the gallery during the four-hole Past Champions Challenge Summer of 2000.

Keep close count of your nickels and dimes, stay away from whiskey, and never concede a putt.

Never let up. The more you can win by, the more doubts you put in the other players' minds the next time out.

No matter what happens - never give up a hole....In tossing in your cards after a bad beginning you also undermine your whole game, because to quit between tee and green is more habit-forming than drinking a highball before breakfast.

Nobody asked how you looked, just what you shot.

Of all the hazards, fear is the worst.

Practice puts brains in your muscles.

The fairways were so narrow you had to walk down them single file.

The only reason I ever played in the first place was so I could afford to hunt and fish.

The three things I fear most in golf are lightning, Ben Hogan and a downhill putt.

There are no short hitters on the tour anymore, just long and unbelievably long.

There is an old saying: if a man comes home with sand in his cuffs and cockleburs in his pants, don't ask him what he shot.

These greens are so fast I have to hold my putter over the ball and hit it with the shadow.

To be consistently effective, you must put a certain distance between yourself and what happens to you on the golf course. This is not indifference, it's detachment.

You can’t go into a shop and buy a good game of golf.

You've just one problem. You stand too close to the ball after you've hit it.

Golf is played with the arms.

Thanks for visiting this page of Sam Snead Quotes 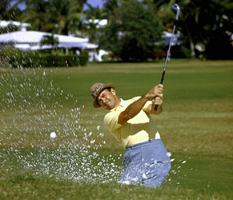 Return to The Top of Sam Snead Quotes