Jack Nicklaus Quotes pays tribute to arguably the most recognized name in golf. Rivaled only by the immense popularity of Arnold Palmer, and the latter generations knowledge of Tiger Woods, "The Golden Bear" is still the standard by which success in golf is measured.

His 18 Major Golf Championships cements that legacy, and his work as a post-playing professional continues to define that success. Jack Nicklaus was a phenomenal talent in his playing days, and continues to make an impact on the game today and is still recognized as a great ambassador of the game of golf.

Jack Nicklaus had unrivaled talent on the golf course, and much of what he could do came from an intellect and an understanding of the game that has also provided us with some priceless golf quotes.

A kid grows up a lot faster on the golf course. Golf teaches you how to behave.

A perfectly straight shot with a big club is a fluke.

Ask yourself how many shots you would have saved if you always developed a strategy before you hit, always played within your capabilities, never lost your temper, and never got down on yourself.

Don't be too proud to take a lesson. I'm not.

Golf is not, and never has been a fair game.

Good golf shots result from delivering the club head to the ball when the club head is traveling either from slightly inside or directly along the target line with the face looking squarely at the target.

He has the finest, fundamentally sound golf swing I've ever seen. Jack Nicklaus on Tiger Woods.

He's going to be around a long, long time, if his body holds up. That's always a concern with a lot of players because of how much they play. A lot of guys can't handle it. But it looks like he can. Jack Nicklaus on Tiger Woods.

I don't know if I'll ever do it again or not, but frankly I don't really care. Jack on his sixth Masters.

I like trying to win. That's what golf is all about.

I never hit a shot, even in practice, without having a very sharp, in focus picture of it in my head. It’s like a color movie. First I ‘see’ the ball where I want it to finish, nice and high and sitting up high on the bright green grass. Then the scene quickly changes and I ‘see’ the ball going there: its path, trajectory, and shape, even its behavior on landing.

I never missed a putt in my mind. jack Nicklaus quotes

I think I fail just a bit less than everyone else.

If there is one thing I have learned during my years as a professional, it is that the only thing constant about golf is its inconsistency.

It takes hundreds of good golf shots to gain confidence, but only one bad one to lose it.

I've always tried to play golf with a golf club. I have a hard time driving with my rifle. I mean, 18 is really narrow ... I have no problem with the course, except for the tee shot on 18. Jack Nicklaus describing 443 yard number 18 at the 1997 Doral-Ryder Open, nicknamed Blue Monster.

Keeping the head still is golf's one universal, unarguable fundamental.

Nobody ever remembers who finished second at anything.

Professional golf is the only sport where, if you win 20 percent of the time, you're the best.

Scoring comes from being able to preserve what you've got and play your smart shots when you need to play them and not do stupid things and take advantage of things when have you them.

Such is putting! 2% technique, 98% inspiration or confidence or touch…the only thing great putters have in common is touch and that is the critical ingredient…none of them found it through mechanizing a stroke, nor do I believe they could maintain it that way.

The older you get the stronger the wind gets and it is always in your face.

There are no maladies in my golf game. My golf game stinks.

There isn't a flaw in his golf or his makeup. He will win more majors than Arnold Palmer and me combined. Somebody is going to dust my records. It might as well be Tiger, because he's such a great kid. Jack on Tiger Woods.

There’s a guy who won’t be in contention. There’s another one I don’t have to worry about. Jack - when fellow competitors complain about playing conditions.

Through years of experience I have found that air offers less resistance than dirt. Jack on why he tees his ball high.

When I want a long ball, I spin my hips faster.

Thanks for visiting this page of Jack Nicklaus Quotes 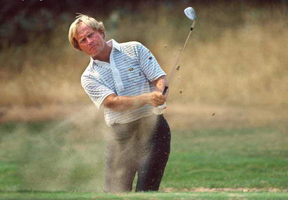 Return to The Top of Jack Nicklaus Quotes